There’s no denying that Cellucor is a company that’s synonymous with C4, their highly successful pre-workout product that’s meant to take your training sessions to the next level. However, today we’re going to take a closer look at their T booster called P6 and more specifically, we’ll check the Cellucor P6 Extreme reviews!

And since this product is definitely one of the more popular products in its category, so there are plenty of unbiased P6 Extreme reviews out there.

Many bodybuilding enthusiasts, gym rats and men, in general, have already tried it with the hope of naturally improving their testosterone levels.

Thus, there are plenty of user testimonies available.

That’s why we’ll see what people who have personally used P6 Extreme have to say about it in terms of effectiveness and even potential side effects!

Most of those who have tried it are apparently satisfied with the product (in a similar fashion to Pharmafreak Test Freak), according to the customer reviews for P6 Extreme Pump on Amazon.

This product has a rating of 3.8 out of 5 stars from a total of 244 reviews – here is a breakdown of the ratings:

As you can see, only a mere 13% of the customers who’ve personally used P6 Extreme Pump weren’t satisfied with this testosterone booster.

That’s a pretty good rating for something that’s been reviewed by over 240 people.

Also, it suggests that Cellucor’s T booster might be a very good product indeed.

It’s also worth noting that when sifting through all the reviews, make sure to focus on the ones that have a “Verified Purchase” badge.

All of this means that the reviewer bought the product from Amazon and didn’t receive a significant discount (meaning that the review is most likely genuine).

These are some of the top-rated and most relevant P6 Extreme Pump reviews that praise this T booster for its effectiveness: 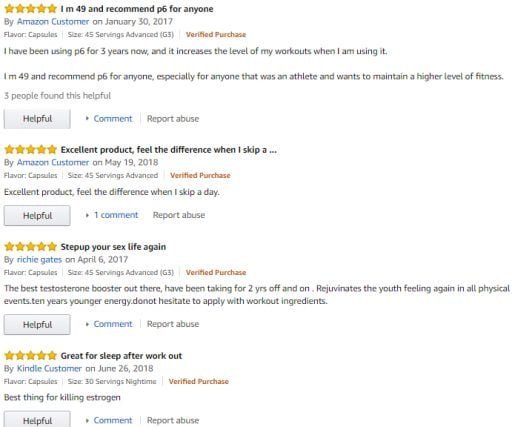 Of course, there are some not-so-positive customer reviews of this supplement and here are a few examples: 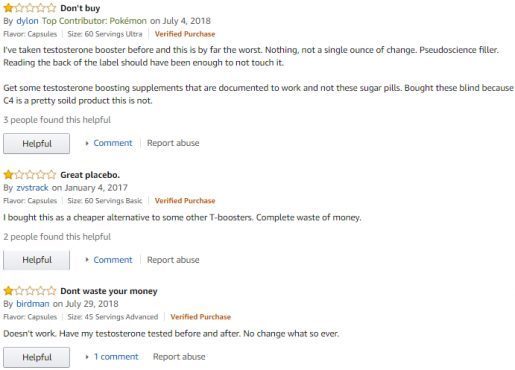 Judging by these rather harsh reviews, P6 Extreme Pump isn’t all that effective for some people.

While our bodies are different and might react differently to certain ingredients.

Apparently, the main problem here, according to these unsatisfied customers is that this T booster simply doesn’t deliver any results.

So, If there are a few folks out there who felt nothing while taking P6 Extreme, perhaps we have to analyze its formula to see whether or not the ingredients are potent enough, don’t you agree?

Yes, some of the ingredients have been scientifically validated to naturally optimize testosterone levels.

Now, while others are effective at increasing the NO (nitric oxide) production in the body, resulting in bigger pumps and even potentially stronger erections.

Now, the P6 Extreme formula is hidden under a proprietary blend with a total of 3,175 mg per dose (5 capsules) – here’s what’s inside:

And here are the ingredients (backed by science) that can improve your vascularity and give you better pumps:

These two Cellucor products are basically the same thing.

In fact, It’s the improved version of the P6 Extreme and It’s the most complete product in the P6 lineup.

P6 Extreme Pump contains all the goodies from P6 Original and P6 Chrome (minus the worthless Tribulus extract).

However, it also adds some sophisticated forms of L-Arginine into the mix.

This is a sort of a two-in-one supplement that combines powerful testosterone-enhancing ingredients with NO-stimulating compounds.

This is supposed to give you better and longer-lasting muscle pumps and an overall increase in vascularity.

Clearly, the vast majority of the P6 Extreme reviews on the internet are quite positive and the 50%+ five-star ratings on Amazon speak for themselves.

In fact, P6 Extreme Pump might even be a worthy addition to the list of the best testosterone booster for men over 50, as older gents would most likely experience a lot of positive effects from using this product.

With a well-thought formula and the addition of ingredients that stimulate increased blood flow (greater muscle pumps).

Cellucor’s P6 Extreme is certainly one of the more intriguing and solid testosterone boosters out there.

What are your thoughts on this product btw?

Have you ever tried it and/or do you consider giving it a try?

Feel free to let me know by dropping your answer in the comment section below!